The dramatic side of marriage has no end and the issue of in-laws in marriage has torn so many relationships apart; while turning the couples or lovers against themselves, and also tearing families apart. 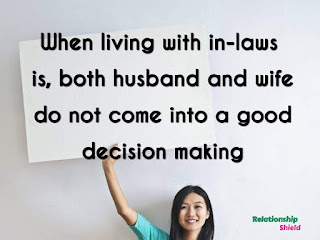 At one end, some couples try to wonder why in-laws have to live with the family. Since marriage is a relationship between husband and wife, then what is the essence of in-laws living with us?
While some other couples claim that living with in-laws or in-laws living with them isn’t healthy and helpful and instead, it destroys the relationship between husband and wife and also depreciates the value of marriage.
Some claim that there is no big deal in extended family living together. But it is better for everyone mind their own business and not interfere in others’ marital issues. “As long as my in-laws don’t interfere in my marriage, then I see no issue with that”, says Becky.
Another couple argued that living with in-laws makes the family large and also gives a helping hand to assist in all ways. So they see no reason why their extended families cannot live with them.
None of these couples are wrong, since it is their marriage and they know what is best for them. But in some cases, many marriages cannot do away with living with in-laws.
There is no reason why your in-laws cannot stay with you; and there is also no point for in-laws to live with couples. Just that, the former could cause more harm than good if both sides fall short in playing their roles rightly.
The reason why there is always issues in marriage when living with in-laws is, both husband and wife do not come into a good decision making as they fail to see their flops.
1. Make it clear: If you are not comfortable with in-laws living with you in your home, then you have to make it known and clear both to your spouse and to your in-laws. The decision should be between husband and wife and not something to discuss or disclose outside of the relationship.
2. For how long: If an agreement is made between husband and wife, as they wish to welcome their in-laws, there should be a duration of time, as to how long will living with them be.
3. Capability: Another thing to consider while dealing with the situation of living with in-laws in marriage as to avoid issues is for couples to know their capabilities. Are you worthy and capable enough to hold the family together most especially as a man.
4. Capacity: Can you contain this family? To contain means to satisfy both in-laws and your marriage at the same time. It is better to know this before you invite or live with in-laws. If you know you cannot contain these people, then do not put your marriage in danger rather than saving it.
5. Understanding: Do not bring in in-laws that didn’t understand your relationship while in courtship, because they will as well find it difficult to understand how your marriage works. If you do, you might single-handedly destroy your marriage.
6. Management: It is hard to manage a relationship between husband and wife. It is more or less like finding perfection in a relationship that involves extended family. So be a wife before you invite in-laws or live with in-laws because it could easily destroy marriage.
7. Tolerance: Another thing to consider is that we are humans; and the level of tolerance varies from one person to another. Some can be temperamental, lousy, insolent and more. This might be another challenge your spouse may need to battle with while finding a way to manage the marriage. This could weigh couples down and as well ruin a marriage.
8. Relationship: Friendliness in courtship before marriage between in-laws and the partner whom you are bringing to live with the family really matters a lot. You will not like to invite a cat and rat into the same house. You the owner of the house will find it hard to sleep when the battle begins; and before you know it, so many things will have been damaged in your marriage.
The beauty of marriage is for couples to live as husband and wife and nothing more, while they face their battles, as they disagree and then agree, without anyone intruding or interfering. Living with in-laws may not be healthy for marriage, but when there is a good reason or due to condition, it could be the only option but it’s not ideal for couples.