Values A Woman Can Offer In a Relationship

It is not just a mere saying that, “what a man can do, a woman can do better”. A woman who can do better than a man has more value to offer in a relationship, than a woman who pulls a man down. 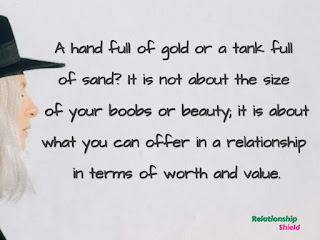 Relationships have gone beyond love love love as we used to know it. While some people believe that relationship is all about sex and fun, well, relationship can be fun until you realise you have wasted your precious time having fun. And the most painful part is to spend that time with the wrong person.
The time has come to understand that, a relationship that does not give nor add value to a man is fruitless and a waste of time you might come to regret later in life, as the woman who claimed to love you then will mock you, disgrace you, embarrass you, ridicule you, when you cannot meet up to standard as a man.
As it is known and believed by men, that a woman can be the foundation of a man’s success, the same woman can also be the greatest regret of a man when chosen wrongly.
As a man, you must be vigilant enough to watch out for the quality values a woman can offer in a relationship. Women as well should take their time to create values for themselves if they feel they lack any or some of the values a woman should offer in a relationship.
These qualities are meant to be known, not when the relationship has gone half way, but should be known at the start of the relationship, as knowing the most sorted qualities of a good woman to marry can help a man choose rightly.
A woman should be a man’s teacher, mentor and a goal setter. A woman should always push a man but not rush him. So many relationships have been broken just because a man is in a relationship with a woman who keeps demanding than contributing to his progress and that of the relationship.
A woman who cannot offer any value to a man in a relationship will be greatly taken advantage of. Most men will dance to your tune as they see you as nothing.
A woman’s worth determines her value; so you might need to ask yourself, what am I worth? A hand full of gold or a tank full of sand? It is not about the size of your boobs or beauty; it is about what you can offer in a relationship in terms of worth and value.
1. Director: A woman should always be one who can direct the path of a man in a relationship, as the journey of a successful man can easily be traced back to the kind of value a woman offers in a relationship. Most men are ‘one way traffic’ kind of people – this means they do find it hard to think and multitask; but a woman can easily multitask more than a man, which is a great advantage to a woman in contributing to the success of a man in a relationship.

“On average, men are more likely better at learning and performing a single task at hand, like cycling or navigating directions, whereas women have superior memory and social cognition skills, making them more equipped for multitasking and creating solutions that work for a group”. says pennmedicine

2. Adviser: When a man is in love, he is prone to be weak-minded in making some decisions in life. Having a woman who can offer a great value to the relationship can be the best thing a man can pray for. When a man falls in love, he always finds a shoulder to lay on. A good woman with great values can offer that.
3. Planner: Though there are some men who are adamant and do not want people to intrude into their lives and businesses, that does not really apply to a woman who he is really in love with. A woman with value can easily help a man plan when he is stuck in thoughts.
4. Progress: As it is said, the rise and downfall of a man has much to do with the kind of woman he spends his time with. Instead of going out with friends, when a man sees reason to be with a woman, he would rather prefer they progress together.
5. Goal setting: You cannot just be a liability to a man in a relationship. A good woman, with great value to add to a relationship, will always be a goal setter; this is what will always keep the man going. When you have a good plan and you set for it and accomplish it, a man will always want to stick to you.
6. Speeds up time: Some men are procrastinators – finding it hard to get things done while they have the resource; but procrastination will not let them achieve anything. A man of this kind will always look for a woman who can help speed things up without laziness.
7. Correct mistakes: Before you make one, a woman who has something good to offer in a relationship, will always help a man figure out his mistakes even before he falls into one. Most men are just like footballers; while on the pitch, they do not know their own mistake. A woman serves as the coach that studies the man to figure out his flaws.
8. Keep families together: A good woman would never be an antagonist to the happiness of a man’s family; instead she keeps the family together as much as possible. Though, it is natural that there could be some of the family members who may not really like her; but she should always look for a way to make peace with the in-laws. It is also better for a woman to know how to avoid living with in-laws when such happens.
9. She gives you Independence: A good woman who has something good to offer in a relationship will always find a way to make you stand your ground as a man, by giving you the confidence needed to make positive things happen, as you find a way not to depend on anyone but yourself.
10. She should be your force: A woman should not be a burden or a load, but a force to support the man to pull and push in a relationship.