Unhealthy Marriage After Having A Baby:

When a baby is born into a family, it should be a thing of rejoicing; but instead giving birth in marriage has become a major problem as it has stolen away so many couples’ joy. A baby after marriage should be a blessing not the beginning of a problem. 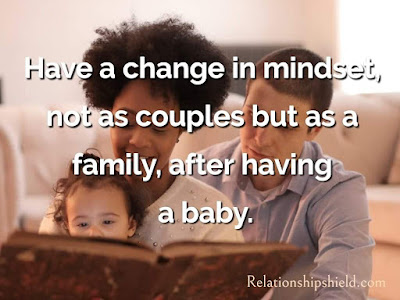 Since change is constant, it is possible to have a change in mindset and behavior after having a baby in marriage, a man can suddenly change towards his wife and change in behavior can occur in a woman after having a baby which can become a serious issue in marriage.
When a baby is born to the family, the wife and husband should have the mindset that they are far more than couples but parents which have more responsibilities to carry because what is meant for two people in a relationship are now for three or more, this mindset is what can keep a successful marriage.
The reason for an unhealthy marriage could be as a result of so many factors leading to issues in marriage after having a baby, which could go as far as both couples thinking of a divorce. It is important for couples to find solutions to these issues in marriage before the unexpected happens.
Parents feel mood swings after having a baby and overcoming mood wings could be challenging. While it can affect both couples, as either husband feels neglected by the wife or wife feels neglected by the husband, problems after having a baby could lead to an unhappy marriage which is unhealthy.
Babybouns stated that “Many pregnant women describe pregnancy as a glorious time, and glow radiantly, and there is evidence to suggest that pregnancy has a protective effect against some psychiatric disorders”.
Marriage is a relationship affair that constantly attracts issues. Problems in marriages can not be eradicated. Even when you think of divorce, getting married to another partner is another challenge to the problem in marriage because it is better to stay with a partner whom you have known for a while than a new partner who you are just starting to know.
Reason for this is because the problem in marriage is not a fault from any of the couples but the act of intimacy defines how compatible couples are. The more couples get close and spend more time together, the better they know more about themselves which could be a blessing and a curse to the marriage.

The Result Of Having a Baby In Marriage

1. Feeling neglected by the wife after a baby: A happy marriage could suddenly turn into a problematic home after childbirth. As marriage becomes a family affair, things that were meant for two people become for three, which may not be an easy task for a woman to handle in marriage.
Though women multi-task, their knowledge is quite limited to that of men, especially for women who have not for once conceived.
It is important to know that new things are not easy to adapt to, especially for couples who just got married. While they are yet to find the right rhythm to their new marriage life by adapting to each other’s behaviour, they are then faced with the issues of how to manage the home after a baby.
It is natural for women to give much attention to a child because babies need much care and attention, but that does not mean that you as a wife in the house should overlook the responsibilities of the house which is required by the mother. However, the father also has a role to play.
2. Husbands ignore wives after baby: This is a very common problem in marriage as men tend to always ignore their women in marriage after having a baby. This could be as a result of so many reasons which we will have to point out with solutions to the problems.
The reason why most men ignore their wives after marriage mostly comes from both couples.
3. Less attention: When some women give birth, they tend to give much attention to the child and give their man less attention. At this point, some men cannot really hold this for long, despite the fact that some men understand that a child needs to be given attention too. But giving too much of your attention to the baby and less to your man could be a great problem in marriage.
Solution:
As a woman, if you find yourself in this situation, make sure you do as much as possible to balance this relationship between the baby and the father. Do not pull too much attention to one and ignore the other. However, it is also a good responsibility of a man to assist his wife in doing some of the house chores so the workload will not be much on the woman which may later look like she is giving much attention to the child rather than both.
4. Laziness: So many women are fond of being lazy after birth which could be a problem in marriage. Men could easily get pissed off and could as well lose interest in a woman who is too lazy to get things done at the right time. Though it is true that women need a lot of rest after having a baby, that is not an excuse for laziness.
5. Less attraction: It is so common for women to get loose after birth, as they in some way look unkempt and less attractive, which could easily irritate a man. Do not use your baby as an excuse for not being able to attract your man. This could easily cause a problem in marriage.
As a woman, it is important to do well to attract your man at every point in time, keep doing the same things you have been doing in your relationship before you got married and even upgrade the method of attracting your man when married; and as well do much more when you give birth so it would not become a problem in your marriage.
6. Communication: This is vital in a relationship and if not done, it could become a problem in marriage. This has to be done most especially when children start to become part of the relationship. You should learn to not make your relationship one sided after having a baby.

How To Keep a Relationship Strong After Having a Baby

7. Parenting mindset: Take it off your mind that you are still a couple but parents who have more responsibilities to carry. The mistake most couples make is that they carry the mindset of couples’ life while in reality things have changed from being a husband and wife to becoming a father and mother, while a family is created.
8. Domestic duties: There is a great difference between courting, dating and marriage. However, parenting is the most challenging of all, as it requires more attention as a family than being a couple. Understanding that domestic duties could be boring is one way to tackle disputes in marriage.
Solution:
Do not let the domestic duties become one sided as it may affect the relationship between couples. Make arrangements to assist each other when due or needed. Men have a great work to do in this, because your wife is now a nursing mother who has a great challenge ahead of her.
To be sincere, to nurse a baby into becoming a grown adult is something worth giving credit to. However, that does not mean men do not have a strong role to play as they carry the responsibilities from becoming a man to a father.
Couples should have time to sit down and make some arrangement and agreements between themselves on how to support one another at this crucial time so it won’t escalate into becoming a problem after childbirth.
9. Parenting style: Since we are different from each other, as couples come from different backgrounds, parenting style will surely be different and this could cause a problem.
Solution:
Good communication and understanding is the best practice to handle such problems in marriage. Take your time to understand each other and learn from your mistakes as couples. Do not argue on things, instead see it as a challenge you need to overcome in your marriage, not as a couple but as a family.
10. Half often sex: This could also become a great problem in marriage. The desire and urge for sex from both partners will be different especially when a baby is added to the family.
Solution:
As a woman, do not say because you are nursing your baby you should not give your man the entitlement he deserves. If he needs it, he deserves to have it. However, men should also understand that women have a change in body system after having a baby. If a man could really understand this, he will have better understanding on why he should consistently have sex with his wife or abstain for some certain period of time.
“motherhood changes you inside and out after having a baby and it is important to repackage yourself and look fit again, according to hopkinsmedicine“.
To avoid being irritated, which could be a problem in marriage, women should always try as much as possible to repackage themselves, and look more attractive to their men, because some men get a bit irritated after a woman has a baby.
11. Mix time: Do not be mistaken, as the couples’ mindset you carry needs to be shifted and advanced to a family mindset, the responsibilities for two people becomes for three and more. So as couples, time must not be mixed up against family.
Solution:
Now the time has come for spending more time at home, not as a couple but as a family.  The duties of a family could help shield the problems in marriage. If you spend half a day with your wife while being a couple, know that the time frame needs to be extended as it helps build a solid bond and a good friendship in the family.
“There are many roles within a family; however, researchers have identified the following five roles as being essential for a healthy family, according to Publications and Educational Resources“.
12. In-laws intruding: This one is something you cannot run away from. Even trying to avoid in-laws from intruding your marriage could be a catastrophe, because they will come no matter how you try to avoid them. Since it is a good thing for couples to have a baby in their marriage, people will surely come to rejoice and celebrate with you. In the course of rejoicing, your in-laws might need to spend some time with you which could make couples uncomfortable.
Solution:
Knowing this to be a tradition rather than a norm is the best way to avoid problems in your marriage after having a baby. At this point, if you do not know how to accommodate people, you have to learn. It is not forever but for a short period of time. You should also learn how to tolerate people, this will help a great way in avoiding issues in marriage.
13. More spending: Now you are more than two and not more than a couple but family. How you spend will surely increase, though you may not budget for this much but that is the life of a family man – expect the unexpected.
Solution:
The best advice is to cut your coat according to your size. Have a budget spending plan. Do not spend more than your income and be wise while making decisions about spending. If you think your income as an office person or a business man is not enough, you can start a freelance job as a side hustle to support yourself.