Do not confuse dating, courting and marriage. They are not the same but are all aspects of a relationship. Dating is not as challenging as courtship while courting is also not as tasking as marriage.
Every stage and level in dating courtship and marriage carries their own weight and it is important to know their purposes. 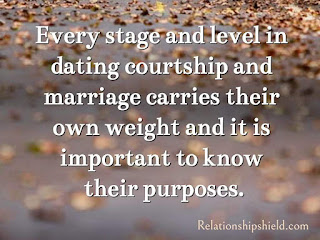 The start of a new relationship is dating; the midway of a relationship is courtship; and then courtship ends in marriage. However, courting, dating and marriage have their differences as they are stages to achieve in each relationship journey.

There are great similarities between courting dating and marriage. All are aspects of a relationship and are attached to emotions and feelings from love which could come as a result of attraction and impressions between two people.
It is important not to misunderstand the differences between dating, courtship and marriage. All are points in love but nearly different relationship journeys.
However, it is important to also note that it is a step to step process to achieve dating courtship and marriage in a relationship. For a successful relationship, lovers must pass through dating and courtship before marriage.
It is also not possible to jump into marriage without passing through thorough stages in dating and courtship. Mistake most couples who find their marriage frustrating make is that they do not take enough of their time to understand the purpose of dating, courting and marriage.

The Complicated Side Of Courtship, Dating And Marriage

One thing to clarify about dating, courtship and marriage is that, at every stage in a relationship, be it dating, courting or marriage, the level of intimacy becomes a vital progress and problem.

According to relationship Australia Intimacy is showing care and love by opening the door to talking and sharing important dreams and hopes. If you can see areas where you fall short, taking little steps to make changes, and perhaps getting support from a counsellor can make a big difference”.

The aspect of intimacy becoming a problem in a relationship: The more you get closer to your partner, or getting to know each other better, the more exposed you are to issues; because the more a person knows your strength and weaknesses, the less valuable you become.
However, the beauty of true love is that love is divine; love neither fades nor hurts you by your weaknesses, instead it tries to help you and build you to become a better person. But the problem is, we are imperfect beings; so we in some ways try to hold on to our lover’s mistakes which might cause more damage to a relationship, be it courtship, dating or marriage.

Things you do in dating

Introduction in dating is when partners ask about each other’s likes and dislikes, hobbies and skills, knowing where each other live, asking about each other’s occupation, knowing about parental and family background, secret visiting, and many more.
Dating does not consume much time nor require sacrifices in order to keep a relationship going, because it is a time both partners feel comfortable about each other.
Reason for this is because they haven’t gotten to know much about themselves. But as time goes by, serious issues and complaints might start surfacing, and here is when courtship comes into play in a relationship.

Marriage is the union between a man and a woman to become one body. It is the end of a relationship journey and this is what shows if a relationship has successfully scaled through dating and courtship.
However, most people do not know the difference between having a successful wedding and a successful marriage. It is of no doubt that most couples fail to recognize that having a successful wedding does not mean a marriage will be successful.
The effect of having a happy wedding but yet a sad marriage is a great challenge to many marriages as we speak; leading so many marriages to divorce.
Do not get it wrong. Courtship, dating and marriage are all relationships, and each is a stage in a relationship. There are responsibilities each lover is to carry in each and every stage. The failure to understand these things can make a relationship journey fruitless at the end.