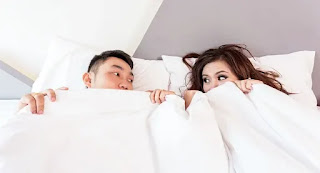 Many people in relationship believe sex can protect and shield a relationship, as they go as far as abusing the essence of sex and practice everyday sex life. But does sex really shield a relationship from breakup?
Gone are the days when being a virgin was a great value and respect to a woman who keeps herself away from sex. Isolating oneself away from sex was one thing that makes a good and righteous woman in the 90s but now, things have changed although not completely, cause some folks still have the mindset and believe that keeping and staying away from sex could give honour, respect and value to a woman in marriage.
“Even couples who start off with hot and heavy sex lives go through slumps at some point” says huffpost
Don’t also forget that sex before marriage is called premarital sex and it is mostly not advisable. But still, the world has taken a drastic turn around as sex has being the foundation and priority of most relationships. Though, some people still embrace the idea of keeping oneself away from sex before marriage.
Are we getting it wrong or we are doing the right thing?
If everyday sex is good or bad, that should be firstly understood by the application of the common sense. Common sense is associated with individual mindset, belief and the application of knowledge to the information we know.
On a neutral ground, some people are of the opinion that sex is good in a relationship and it could protect a relationship from break ups, on another level, some others will disagree with this notion that sex in a relationship is bad and it can not shield a relationship or protect a relationship from breakup.
However, we can deduce from our own belief and mindset to accept if sex or everyday sex is good in a relationship or otherwise.
On a medical terms of if everyday sex is good or bad, according to the latest studies writing by mirror;  “Regular sex that’s one to two love making session per week can provide some incredible boosts to your health and well being”

Still, does that mean that we should indulge ourselves in everyday sex and will it keep our relationships from break up?
Answer to what the negative effects of having sex everyday is? by Elia Mirca for Quora– “Not in my experience. I know men and women who enjoy having sex not only every day but multiple times a day. I also know people who only have sex a few times a year. Both groups are as happy as they could be. Neither their health nor their happiness is affected by much/little sex.
Elia Mirca continued “A potential negative effect is when one partner wants sex much more frequently than the other. It can kill a relationship when one isn’t considerate of the feelings and capabilities of the partner”.
This is exactly where we are heading too; everyday sex could be bad as killing a relationship and it could also damage our partners sexual life in marriage because they will never be satisfied with the pleasure derived from their spouses in marriage.
Addiction to everyday sex could build in our mind  several forms of sex pleasure most especially when we are sexually active but couldn’t find our partner around or when we are mostly alone.
In an article by VincentEstellon, PhD and Harold Mouras, PhD states that – “Consumer studies shows that on Google, the world’s number one search motor, on the terms ‘sex’, ‘love’, ‘porn’ arrive at the fore of all requests by both type and nature. Sexuality has become recreational and even imperative.
Sexual differences have been one of the biggest and longest problems in marriages, a situation where one partner is more sexually active than the other which could easily ruin the marriage.
When the foundation of a relationship is built on sex then there is high tendency that such relationship will lead to no where but eventually end in breakup.

How To Stop Being Selfish In a Relationship